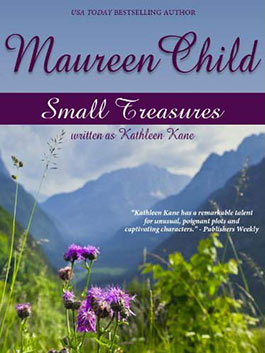 Plucky seamstress Abby Sutton had traveled across the untamed West to the one-room cabin she had inherited. She refused to give up her only home simply because a gruff mountain man claimed he had bought it before her uncle died. No, she would stay put and let the traveling judge decide who rightfully owned the place. Anything could happen in the five weeks before the judge made his way back to town.

Samuel Hart knew he could easily eject the feisty brunette – after all, she was a tiny thing, and he was so big, he scared the local townsfolk. But he couldn’t bring himself to turn a defenseless woman out in the cold … even when she took over his masculine domain with cleaning and laughing and singing and painting the place pink, for godsake.

He had grown used to seeing fear in women’s eyes, but try as he might, the only thing Samuel saw in Abby’s eyes was affection… and the hint of something deeper, something that made him yearn for the life he had never allowed himself to want.