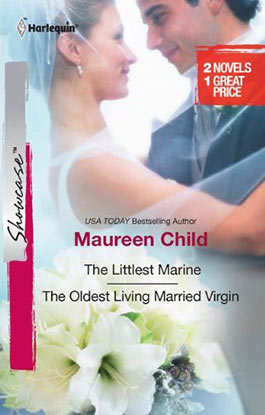 The Littlest Marine
and
The Oldest Living Married Virgin

Bachelor marine Harding Casey was about to face his greatest challenge. Fatherhood. But convincing his expecting—and reluctant—intended bride to marry him was going to be his toughest battle yet! Elizabeth Stone didn't know if her jitters were caused by Harding's incredible good looks or the fear of marrying without love. Could her intended groom prove that his marriage proposal was about more than giving a name to the littlest marine she was carrying?

When Colonel Candello found his daughter in a marine's room the morning after the Battalion Ball, he was ready to explode. Until First Sergeant Jack Harris offered to marry Donna—in name only—to save all their reputations. So, for better or worse, they married. But the romantic vows that were supposed to bring flutters of happiness were making Donna wince. For now she wasn't only the oldest living virgin, but the oldest living married virgin. And so she set out to make her strong, rugged and heart-stoppingly handsome husband want her as his wife…forever.